The for real Real Housewives of Orange County

Now, I know for a fact I cannot be the only married woman in Orange county California to out, as in, expose, the "Real" ones, but I personally wouldn't have had the nerve to do so until they started tearing out each others extensions and buying plastic surgery procedures from megalomart.  But really, why wouldn't the stereotypical, much maligned housewife? Bulk buying is bulk buying, not that The Real housewives do that sort of thing either, but neither do I. See? Me. An OC HW.
However,  I am a real housewife of Orange county who, between job/dog/man/job/man generated dinner party/children/car dealership retardation/children's cars/job/what's for dinner/dry cleaners who you hope can do something with the wine you spilled on your husbands YELLOW (what is it with this color and me lately? ) linen shirt because you decided to wear it as a shirt dress. *sigh )/Businessville/Dad, I need a few dollars, you know, in between all the stuff one has to do keep all the balls in the air, I decided cookies needed to be made. They're for a client. What can I say?
I do live in Orange county, however, I do not have staff, and  I do not live behind a gate ( please don't stalk me ). Cookies means, me, in the kitchen, in an apron, hurrying. See? Pretty? No?  Well, they're full of butter. They don't have to be pretty. Sort of like a rich man doesn't have to be pretty. 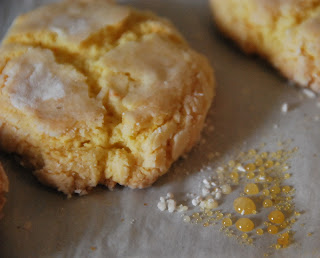 Being from Orange county, I have to own shoes like the the ones to the right and I have be able to cover much ground/go up and down hills in them but as funny as it would be to say I did, I did not wear them when I baked, because there were a couple ibuprophen the day after those shoes and I'm not insane which brings me to a little more "for real"
At one point I said I wanted to be Paul Dean's daughter. I believe in butter.  A lot of butter, but I don't believe it all belongs on my sitdownish bits and I've decided since cooking is so much work and so many people are so much better at it than me, I should let them help.  It's not any better to make a money off your own suffering than it is to make money off other peoples suffering, which is why I didn't go to law school and won't become a stock broker.  I do believe in butter, but I also believe in my barefeet, in the kitchen, in not being pregnant ( please don't get me pregnant ..i'm 47. i couldn't handled it. ) and as of today, I believe in cake mix...  and champagne. Actually, I've believed in champagne for a while.
There is a proof reading position open at cookedheads if you'll work for processed cheese slices, bulk butter and champagne.    Take over the world, Pinkie...
Posted by Tracy at 11:30 AM

Email ThisBlogThis!Share to TwitterShare to FacebookShare to Pinterest
Labels: muchness