pre-post:  well...ok.  one correction.  ;)
If you followed me, you could puzzle out what it was, but it wouldn't be enough to get me to follow, and I am grinning as much as I hope you are.

There is a piece of me that does not want to post this, but the blog that started all this, whatever "this" turns out to be, was a promise to the Best to be truthful about what It Created me to Be, so i give truth, now, as much and as often as i remember how.  I am to the point in my life where I need help in the sense that the woefully disparaging expression "it's hard to find good help" should have been meant. I hope it was meant that way.  I completely mean it that way.
The bag of stories that make up "my life" have become so much that I have had to find someone to do the things I want to but cannot do and still do the things I  must do:
Keep my home the way it should be kept.

The part of me that doesn't want to post this says,
"That's not true. You could stop doing this. You could get up earlier. You could stop reading. Dancing is not exercise."
Ah... that I recognize and it's always the same thing.

and I do not believe it because it,
is,
not,
real.
It is another lie.
Lying is so little fun and the wild ride of truth is beyond anything I could have imaged it To Be..
Tomorrow is the last post of/from blogspot and I'm only doing that one last final  tango because it's my birthday and there are some people I want to thank.
After that.....come here.
Today... I give
,
joy,
&
gumbo...
....to share, to freeze, to give away to/for 20 starving people or 40 people who want to eat.
The good news is that this recipe can be reduced if you have basic math skills. 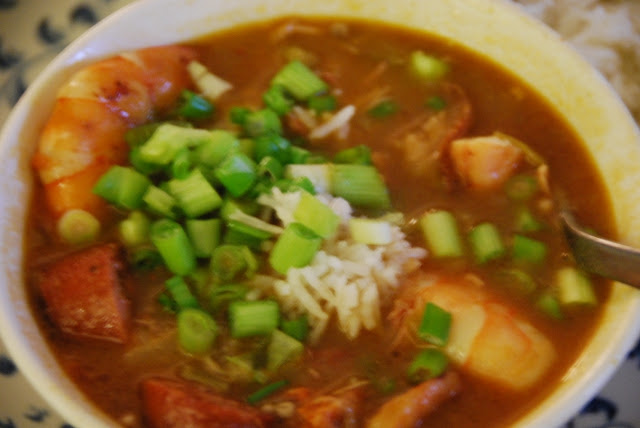 Most of all, for my mother, because the thanking starts there and because she deserves a beach of her very own:
Place the fat in a very large dutch oven until it's almost smoking then add  all other ingredients.  You want some color on this so depending on your stove and pan, allow it to sit until the vegetables on the very bottom being to caramelize a bit.  Continue to cook until the vegetables are sweated and the bottom of the pan has begun is begging you to deglaze it.
Deglaze the pan until all the browned bits that were previously stuck to the bottom have now loosened into a rich broth.
Allow the mixture to simmer on low while you do the following in a heavy skillet.
cook the bacon until the fat is rendered and take out the solids. Set aside.   Cut the chicken thighs into comfortable mouthsized pieces and cook in the bacon fat until they're browned.  Set aside.  in the same skillet brown and set aside:
Add the meats to the vegetables and add:
Allow to simmer for three hours on the lowest temperature that will produce a simmer. Stoves differ so that's as specific as I can get.   Add more water if you need to to create a broth that's about "stew" consistency then add:
Return the soup to a boil and add
Continue to cook on low and while the shrimp and scallops become opaque, in the skillet you used to cook the chicken and sausage slowly cook
To serve, top the gumbo, with a scoop of the cooked crab meat, chopped green onions and put some Tabasco on the table.  That's all it needs, but steamed white rice and crusty French bread have their place too... you'll have to use them the way you see fit..
no proofreading because it's all okay, even the ink splots, the typos, the guesswork and the stretch marks....  je t'aime toujour, Maman.