"Don't never do this"

This is something my husband often says to me while he's doing something he does not want me to repeat, like make an illegal u-turn or skip my annual dental check-up or run with scissors.  He's a bit older than I am and thus feels as if it's his job to keep me from killing myself or getting gingivitis.
In this post, as I prepare to basically copy and paste a large chunk of the NY Times, I mean the above expression of warning in the sense that I'm going to do something I normally avoid in my own blogs but don't so much mind in other people's because I feel like they're doing me a service by showing me something I might not have otherwise seen.  Like this, and for the digitally slothful,  the U.S. military has the ability to inflict internet on countries whose dictators/leaders have refused to allow their people to have access to the www.
So yes, plagiarism. From the New York Times, I give you Liu Ming, a teacher of Chinese traditional medicine
and feng shui, in his pod of happiness.  I want a pod of happiness. 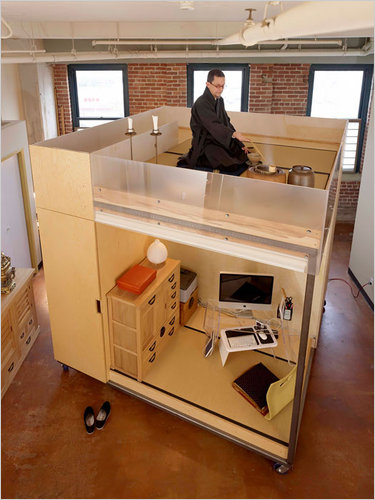 “In feng shui, we talk about the harmony in the place that you live in,” Mr. Liu says. “The cube evolved out of wanting cozy with the option of keeping a big, open space at the same time. And we added wheels for feng shui purposes. Now that it is portable, I can spin it on an axis, I can point my head and point my desk in different compass directions for different projects. If I am writing something and feel blocked, I can get up and move the room.”
Now he’s got the writer’s attention. Does it help?
“Yeah, it does,” Mr. Liu says. “And it’s playful.”
Do not underestimate the importance of playful when talking to Mr. Liu, who is not of the deadly earnest school of Eastern teacher.
Can you really make a living by teaching Chinese medicine and feng shui? he is asked.
“Yeah,” he says, “Of course, you have to live in Berkeley.”
Gotta love California...
Posted by Tracy at 8:23 AM