Where I come from, the photo to the right is the beginning of dinner, specifically something my Virgnia born husband and I call the Farm Dinner.  It's a simple meal, unless you live in California, where people don't buy collard greens to eat.  They feed them to their pet reptiles.  True story, a woman in the grocery store asked me if I had an iguana. Who knew. Secondly, I literally have to pass six grocery stores to get to the one that sells salt pork and if you're ever looking for grits, they're hiding in the package called polenta, which is Italian for "grits" and while you can't get these people to eat grits, they can't get enough polenta.

The meal is the same sort of food that has created the backbone of every culture's culinary identity. No matter where it's happened it's an art that takes simple, inexpensive ingredients and changes them into the world's best food. This sort of cooking has gone on for centuries where ever women have needed to feed their families on what was available to them.   In France it's cassoulet. In Italy, it's osso bucco.  In Vietname it's pho.  In Inda it's a myriad of heady curries.  In the Southern United States, among other iterations, it's this:


Farm Dinner
Pinto Beans
Green Beans and Baby New Potatoes
Mixed Greens
Cucumber, Tomato Salad
Pickled Beets
Corn bread and Butter
Sweet Tea
And to the woman who told me no one in California eats greens, you're paying $15.00 for a plate of iguana food up the street because they added roasted garlic and Italy's answer to salt pork to it. Your people call it "pan-cet-ta". 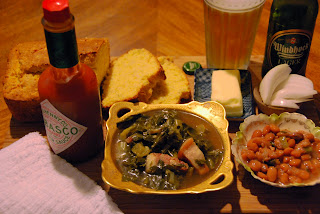 Post Post:.  After I burned, cut and stained my hands red,  opted out of the salad, green beans, new potatoes, opted into a sedating South African beer instead of sweet tea and had made a huge mess of the kitchen, I decided that that horrible women KNEW what greens were and she was laughing at me because I was going home to cook them when the Italian restaurant up the street would do it for me.  By the time the night was over, I'd have paid 30.00 for iguana food and a clean kitchen.
Should have gone to the Italian place for Dinner
Beans
Greens
Cornbread
Be quiet and hand me the bottle opener.
Posted by Tracy at 4:28 PM