I know just how the chickpea felt...

I've spent the past couple days?/weeks? simmering in digital juices, aka working for money.  I'm a computer geek along the lines of a fireman so most of the time, I sit around the "firehouse" waiting and watching until an alarm goes off at which time, I turn into a crazy woman. Crazy might be too strong of a word, though probably not, because when you spend days looking at things  like database patches ( long  story ) and Linux printer drivers for an ERP point of sale systems ( longer story ) you do slog back into the firehouse feeling a little cooked.
I have not, however, cooked in a literal sense because at the end of the day, I lack the braincells to operate all those complex stove dials and microwave buttons.  Voice command and robots can't come fast enough for me.  Even so we've managed to eat with care and I'm now out of my fat clothes and into my next to fat clothes ( am I the only one that has ten different sizes in their closet?  yes? ....dang ). VegtheMan is still not eating meat. He's actually lost ten lbs and my lord that boy eats. I've been stunned and the amount of chow he goes through and at how little our grocery bill has changed. 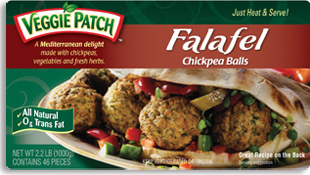 We've cleaned out the freezer of beans, soups etc.  VtM has become best friends with the rice steamer and we have been doing a lot of vegetarian take out, veggie burgers, cereal ( soy or almond milk for me.. the cow stuff smells like feet which makes great cheese, but is just seriously wrong on granola ), and  falafel!
VtM found these in one of this recon missions to the megalogiganticus mart of largness and too muchness aka Costco.

Falafel Pita
Heat falafel. Heat and split pita bread to make a pocket. Place as many falafel as you like into the pocket (I use 1 because I cut the top off the pita and leave the bigger portion for the bigger human who uses 3 ) layer the vegetables as preferred and drizzle with sauce.  Eat. Go sit and stare at the wall.. or better yet, read this, but the word s.e.x.u.a.l is used so if that bothers you, you might want to pass:
Chickpea to Cook
A chickpea leaps almost over the rim of the pot
where it's being boiled.


The cook knocks him down with the ladle.


"Don't you try to jump out.
You think I'm torturing you.
I'm giving you flavor,
so you can mix with spices and rice
and be the lovely vitality of a human being.


Remember when you drank rain in the garden.
That was for this."


Grace first. Sexual pleasure,
then a boiling new life begins,
and the Friend has something good to eat.


Eventually the chickpea
will say to the cook,
"Boil me some more.
Hit me with the skimming spoon.
I can't do this by myself.

I'm like an elephant that dreams of gardens
back in Hindustan and doesn't pay attention
to his driver. You're my cook, my driver,
my way into existence. I love your cooking."


The cook says,
"I was once like you,
fresh from the ground. Then I boiled in time,
and boiled in the body, two fierce boilings.


My animal soul grew powerful.
I controlled it with practices,
and boiled some more, and boiled
once beyond that,
and became your teacher."