Let's play "we own a company"

My wife-in-law and I are going away next weekend to the Central Coastal wine region of California and we're on a mission.  She hates her job and I'm bored but it's our intention to fix that by starting a company.  I'd tell you all about it but we don't know what it looks like.    We're just at a point in our lives where we want to "make" something. The point isn't to get rich, and I'm not naive about the realities of owning your own business.  I grew up in a family who owed a steel fabrication company in Texas and it's very hard, very endless, very unforgiving at times.   I don't care.  I'm doing it anyway.

At this point, the passion is the doing of it, not its specific manifestation.


The question has become how do we bring this "thing" into reality.   A few weeks ago, I told her to spend 300 seconds every day just writing down the things she loved.  We only talked about it after that when she would rail against the horrors of her job again and I would respond by telling her to keep writing as a way to change the hamster wheel of a subject and to help her focus on how much great stuff she had in her life.   Then I went somewhere outside my own grind and a very general idea was born in thanks to the people at a small vineyard in northern Sonoma.

In prep school, my husband's roommate was a man who now owns the vineyard in Healdsburg, CA and I'd always wanted to go see it, but Flynn was reluctant because he didn't want to presume there was still any attachment. In many ways, he's shy, to say the least. I didn't care. I wanted the adventure and he wanted to make up for leaving a restaurant in a huff over parking.    The property was beautiful.  The people were the kind of people who love what they're doing and want very much to share it with you.  Not that it's that hard to figure out how easy it would be to share wine in Sonoma county on a covered veranda where the flora and the fauna assault your sense almost as much as the 1991 Cabernet Sauvignon you buy to drink right then because you don't want to stop talking with all these people who practically shimmer with the delight they find in what they do.   During the long day we spent sitting, drinking, talking, many locals came by for tastings and to see their friends.  These are people who spend their days in gum boots in the dirt, in clogs mincing mignonette, in blue jeans riddling small batches of sparkling wine, people who smell of orange oil and sandalwood because they've spent the day mixing essential oils into the soap they're going to triple mill.
These people aren't monetarily rich, but they have a wealth I want above all others.  They make love to each day. 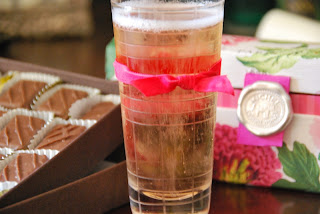 The other day, over a few glasses of viognier, I asked my wife-in-law about her list.  She told me it had gotten quite long.
I already have a list of things I love.  These are the seeds of a joyful mess.
Posted by Tracy at 8:43 AM