The very funny lady from Yolk: gave me my new writing mantra.
"Forget the inner editor",   she said
It doesn't take a genius to decide this bar is much closer to being one I can clear than the quote I had been using is.
It removes a lot of self-inflicted pressure and, at the very least, has the potential to improve my writing experience.  It just so happens to be a very good bit of life advise as well.
We question ourselves entirely too much.   Imagine there's a smarter, wiser, truer voice deep within you, or high above you that says,
"Just keep going, you're fine. If you look like you're going to fall, I'll let you know."
Of course, this assumes you aren't a serial killer, aren't trying to abuse your fellow human being and aren't a heinous person perpetrating genocide.  This answer only works for general and benevolent intent from a compassionate base.
I've told my inner editor to go fix itself a cocktail and I'll be with it shortly. By "shortly", I mean several months from now when the first draft is finished.  Bottom line: I'm back at work on the book or rather, I will be after I bake coconut almond macaroons, toffee shortbread meltaways ( thank you Amanda ), chocolate chip and junk drawer cookies  for classroom full of lanky geeky engineer types.  Nothing like a sugar high to help you get through a lesson in hydraulic engineering.

Junk Drawer Cookies
The base for this recipe is here but I deviate. (Three or for days later, you'll how much. ) I'm a deviant.
(I'll add a photo to the post later. Right now I have to bake.
My inner editor wants me to put in a photo now.
I'm ignoring it.)
Three? Four? days later *drumroll 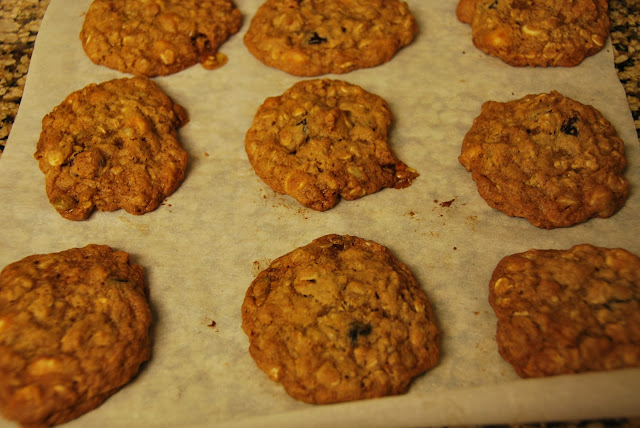 Preheat oven to 350°F. Line a large cookie sheet with parchment or a Silpat (rubber nonstick baking mat). Using an electric mixer, beat the butter in a bowl until light and fluffy. Add both sugars, salt, and vanilla, and beat until well mixed, about 3 minutes. Stir in eggs, one at a time. Add egg nog.
Sift together the flour, baking soda, and spice in separate bowl. Add half of the flour mixture to the butter with the mixer on low speed. Once the flour has been incorporated, add the second half. Stir in the oats, nuts, dried fruit, chips and whatever else you have "some left over".. Drop the dough, by the tablespoon, onto the cookie sheet and bake for 10-12 minutes or until golden. Remove from the oven and cool the cookies on a rack. Store at room temperature in a cookie jar or other airtight container.


All this blue font will tell you why I will never write a cook book and why cookedheads will never be a cooking blog...
Posted by Tracy at 7:52 AM