Not quite afternoon tea at the Ritz

I'm reading Emma for the first time, the one by Jane Austen, as though there was any other, and I for one will speak quite poorly of Mr. Seth Grahame-Smith should he do to Emma what he has done to Pride and Prejudice.  I really have to stop that. I'm starting to write like I'm wearing a muslin day dress with an empire waist and gigot sleeves, but I digress as I am wont to do.
"'Wont to do'?  You're 'wont to do'? Really?"
Okay.  This is me stopping, but I did decide I would take myself to tea today. I was encouraged by price of a nice tea offered at the Ritz in Laguna Nigel and discouraged when I found out they only serve tea during the holidays.
Instead, I grated cucumber for the sandwiches which I plan to have tomorrow, and toasted an English muffin which eventually became this: 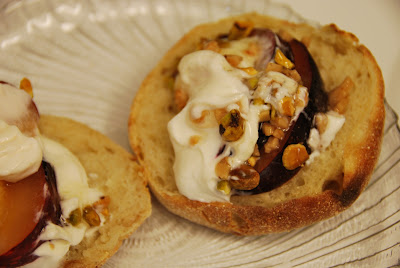 because while the muffin was toasting, I did this: 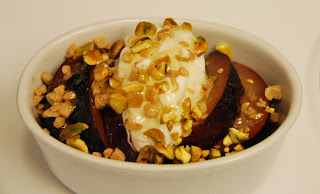 Tea and Crumpets
for someone who wants to fit into the size 14 linen slacks
STILL hanging in the closet..
While the unsplit muffin is toasting, slice the plum into thin wedges, top with the quenelle of greek yogurt, sprinkle the toffee and the pistachios on top then drizzle with honey.  Once the muffin is sufficiently toasted,
pull it apart and plop a dollop of the fruit and yogurt mixture on top.  Eat and remind yourself as each toffee bit crunches in your mouth that it's Sunday and it's not like you used clotted cream and jam.
Posted by Tracy at 12:13 PM