From possibility to actuality.   Can I eat my way thin?  We’re about to find out.  I weigh 230 lbs.  (holy cow..no self-demeaning pun intended ). I hate to exercise and I love to eat. I know more about food than anyone I know and I don’t diet, or rather until this moment, I’ve never stopped dieting.
That’s not true. I remember there was a time when I didn’t diet, but that was back when I thought the petting zoo was all that and a bag of  Jalapeno Zaps.  Now the bar for what constitutes entertainment is a great deal higher, but at 46, I’m tired of not being able to get into the cute clothes I’m chic enough to recognize if not thin enough to wear.  It’s just as not much fun to wear a sweater dress when you know it looks like sausage casing and skinny stilettos just do not work on cankles.   The health thing is a downer too, but if I’m honest, not so much as cankles.
By my fiftieth birthday, I plan on being rich and thin.    The plan is fairly simple, at least the last part of the plan is.  I’m going to eat 1600 calories a day and I’m going burn 200 extra calories a day in purposeful movement.   One thing I am NOT going to do, at least at first, is worry about what makes up that 1600 calories or how I burn that 200 calories.  I refuse to use the word exercise.  Its effect on me is an immediate need for toasted brioche and enough Nutella to account for about half my 1600 calories for the day.
Let’s see.
The average brioche has anywhere from 200 to 300 calories, depending on how generous the baker is with butter. Nutella has 100 calories per tablespoon.  So does butter and while Nutella is an obvious taste winner, you can’t really toast brioche with it.  I don’t actually have empirical data, but it’s a pretty good guess..   The math looks like:  200 X 1 brioche ( I am trying to cut down here ) + 2 x 100 ( even the jar tells you if you’re going to have a serving you’re SUPPOSED to have 2 tablespoons ) + 1 x 100 (it’s,  like,  buttah, though a whole tablespoon of it might be a bit much, even for me…)=  a lot less than I thought and I have seen a lot of thin women in line at the French bakery.  Come to think of  it, thin women are the only women I see in the French bakery.  Fat women stay at home and settle.  I see a pattern. 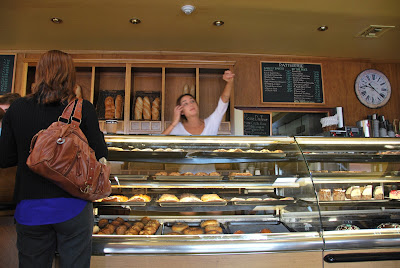 Newer Post Home
Subscribe to: Post Comments (Atom)
A poem, "Cooked Heads" was the inspiration for this place. There is a line within it that says, "Heros do not stay lined up in ranks very long." Cookheads the blog has broken rank and moved in the direction of something heroic. What that will be is for us to discover together. Below is the link to that path.
Much Love,
Tracy